How does water move from the natural environment into the water system?

What mechanisms move water between your home, school and workplace?

How might climate change impact water supply? Could we run out of water?

These are just some of the questions researchers are asking, and WATER FUTURES lets YOU become the researcher in order to help answer them!

What is Water Futures?

WATER FUTURES provides an easy-to-use interface for exploring how changes in climate and other environmental conditions impact the way water is supplied to your home, school and places of work using a model developed at the University of Oxford.

The goal of WATER FUTURES is to give more people access to the tools used by scientists and authorities to manage environmental challenges.

Visualise how changes in population, climate and other factors can impact the components which make up the East London water system.

This interactive visualisation tool strings together several different models, which allows users to explore how water resources move throughout London. Models in general allow researchers, engineers and decision makers to envision different possible scenarios or outcomes. The models used in this tool are from Thames Water, a weather model from the University of Bristol and a water resources model from the University of Oxford called the WATHNET model.

The WATHNET model maps the complex movement, use, and storage of water resources in a particular area, the parts that make up the system in the model are referred to as nodes and arcs. In WATHNET six different nodes are defined, they are stream, reservoir, demand, waste, harvest and junction nodes:

For more information on the WATHNET model click here

Water Futures: East London is a collaborative effort between the University of Oxford's MaRIUS project and Thames21.

Built by the University of Oxford 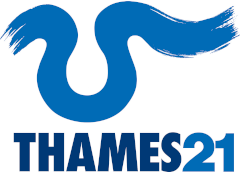